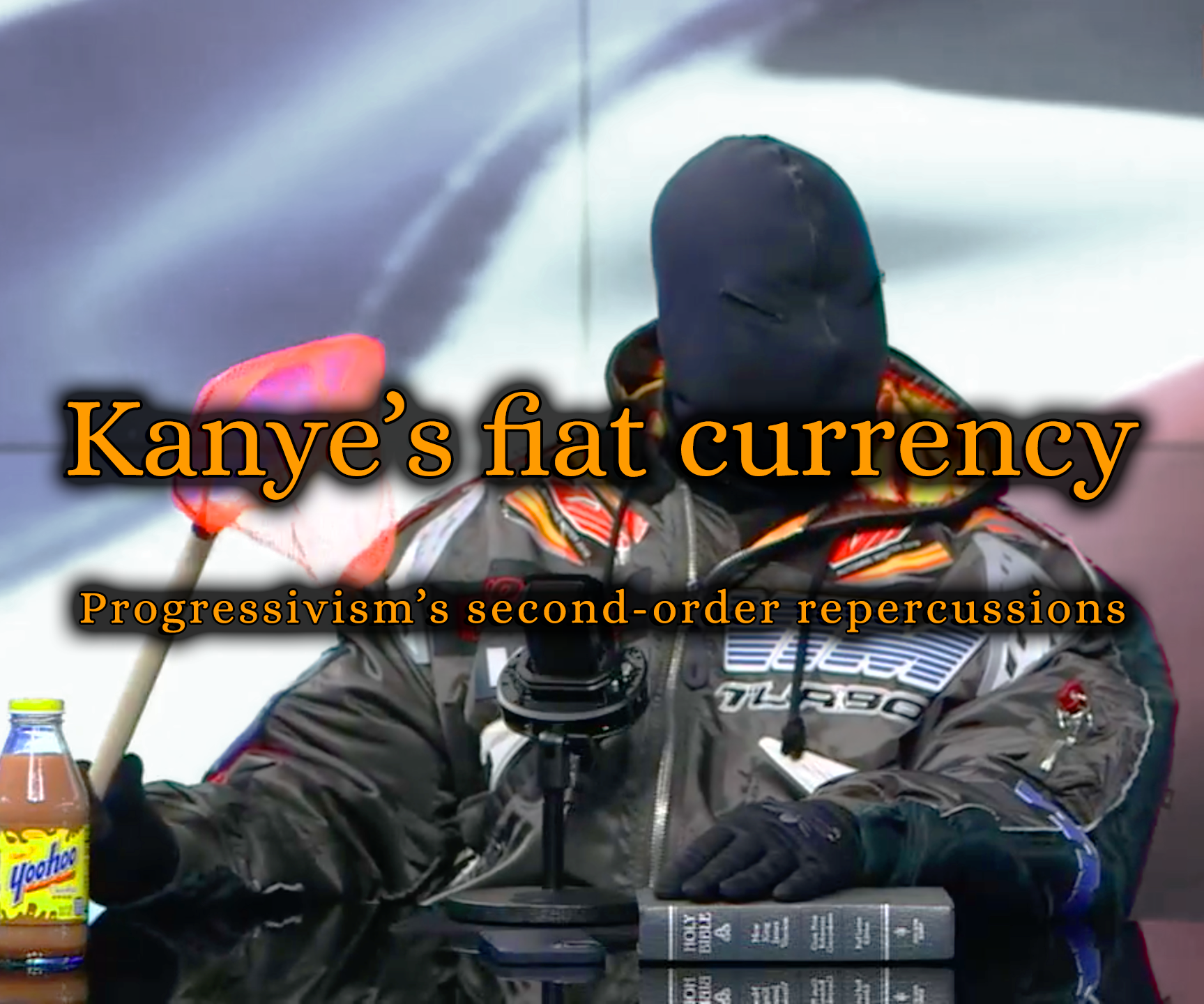 In clown world it’s sometimes hard to separate the idiot from the savant, and for years the ramblings of Kanye West (“Ye”) remained indecipherable to many. After his dramatic transformation from secular sensation to Trump-stumping bible-thumper, the mainstream media made it even more difficult by casting every minute twitch or extemporaneous syllable as definitive proof of neurological disorder and/or Nazism. Then recently Ye started having an awful lot to say about Jews, even tweeting about going “death con [sic] 3 on JEWSISH PEOPLE,” claiming that he couldn’t be antisemitic because blacks are actually Jewish (a Nation of Islam and Black Hebrew Israelite notion). He lost sponsorships, partnerships, and his Twitter account (then he got it back, and then lost it again late Thursday evening).

This week, he first made headlines by bringing white separatist Nick Fuentes to an awkward dinner with Trump, who apparently didn’t know who Fuentes was. Fuentes also talks about the Jews a lot. A few days later Ye dominated headlines again when he and Fuentes made a bizarre three-hour appearance on Alex Jones’ InfoWars, clearly working together as a team. Ye looked like the lovechild of a motocross rider and a black ops mercenary, complete with face sock and clumsy gloves. He opened with an imploration to “put Jesus first,” and then went back to talking about the Jews, with Fuentes’ more coherent help (Ye seemed eager to defer to Fuentes when clarity was required). At times, Ye paused to whip out an orange aquarium net, a bottle of Yoo-hoo, and squeaky interjections so he could perform a simulated conversation with Israeli Prime Minister Benjamin Netanyahu. When the subject of cancel culture came up and Jones thought he was defending Ye by declaring, “You’re not Hitler. You’re not a Nazi. You don’t deserve to be called that and demonized,” the conversation took an even more freakish turn. “Well, I see good things about Hitler also…I love everyone,” Ye responded. Later, he quipped that “we’re going to stop dissing the Nazis all the time.” Jones looked less comfortable than when he was in court accumulating an intractable $1.4B worth of fines.

To be exceedingly generous, one could chalk-up most of Ye’s comments to a radically strict adherence to the “love everyone” mantra born of his freshly minted religious zeal. That, and ignorance. After all, he did say he hadn’t even heard of Benjamin Netanyahu until “two weeks ago,” and he credited Hitler with the invention of both highways and microphones [um…no] before concluding that “every human being has something of value that they bring to the table, especially Hitler.” Would Hitler’s value be that he…killed Hitler? As Jones pointed out, Ye’s perception of “the Jews” is clearly tainted by his acrimonious relationship with LA entertainment executives, who are indeed disproportionately Jewish. But let’s not be naively generous. There’s something more pernicious at play here: Both Ye and Fuentes are inevitable second-order effects of the same psycho-philosophical mindset destroying the country they’re allegedly trying to save.

Philosophically, the woke left are collectivists: they see people primarily as members of groups rather than individuals. This fundamental error tears a hole in a culture’s ethical standards into which tyrants, politburos, politicians, bureaucrats, and democracies alike cram all manner of horror under the guise of “public good.” Traditional Marxists used the collectivism of economic class to categorize people into oppressors and oppressed. Since that didn’t achieve their goal of dismantling America, their ideological ancestors evolved to categorize people into individualist and anti-individualist buckets. Anyone or anything loosely (or even erroneously) representing American individualism (reason, free markets, individual sovereignty, classical music, Christianity, math, Shakespeare, monogamy, “whiteness,” punctuality–you name it) is nonchalantly smeared with ad hominem oppressor labels (racist, bigoted, misogynistic, transphobic, etc.). Anyone or anything willing to testify to victimhood at the hands of these oppressors is lauded, coddled, given jobs in Diversity, Equity, and Inclusion departments, and promised a ruthless, primeval vengeance. And nearly everyone–including and especially twenty-four-year-olds like Nick Fuentes–is indoctrinated into the collectivist mindset of group primacy over individual autonomy.

Psychologically, the woke left are Manichean (among an assortment of other maladjustments not addressed here). It’s not just people who are neatly divided into two groups, but everything. Nuance is a sin. Untested mRNA shots? Good, 100%. Anyone who asks questions or talks about risks and rewards is wrong, 100%. Anything that furthers the agenda of climate socialism? Good, 100%. Because carbon. Anyone who asks questions, suggests that human benefits from cheap fuel need to be factored into policy decisions, or that impending change might be less than apocalyptic, is wrong. They’re “climate deniers,” 100%. Sterilize angsty teens? Good, 100%. Anyone who asks questions about long-term effects, wonders whether psychological evaluations are extensive enough, or suggests that parents should be involved in permanent medical decisions is a transphobic bigot and utterly wrong, 100%. This lobotomized excuse for thinking is what the woke call “educated.” And although this cultural affliction may be a psychological byproduct of critical theory, the virus is more common than COVID–and deadlier. Twenty-four-year-olds like Nick Fuentes have certainly been exposed since birth.

So when someone fully accepts the low-resolution taxonomy and primitive epistemology of a degenerate culture, but disagrees with the anti-American motive behind it, how does he react? For starters, he begins looking for an “oppressor” class of which he’s not a part, and on whom he can blame the deterioration of America. And since he’s been taught to organize human beings along racial and ethnic lines, these boundaries must remain intact. He will only jettison and reimagine moral evaluation of groups, not groups themselves. His target oppressor class would need to hold power (or at least be perceived to hold it). He also expects any criticisms leveled against such an oppressor class to trigger a ferocious and unrepentant defense. These criteria rule out most minorities, and all whites. But there is an ethic group that fits. On his InfoWars appearance, Fuentes even exposed this part of his mental calculus: “They always say, well: Don’t talk about a group, talk about the individuals…you can say the black vote, but when you talk about Jewish businessmen and somehow that’s a problem; you can talk about groups when it’s one but not the other.” Target acquired. Sorry, Jews.

Confident at having zeroed in on the oppressors, Fuentes proceeds to criticize some Talmudic rules, which could be part of a perfectly reasonable discussion. Except instead of using his point of disagreement to delve into an examination of ideas, cultural values, and philosophic principles, Fuentes simply tosses the Talmud out to the trio as fodder for a general bitch session about the problem of the Jews. To his credit, Jones pushes back several times, but Ye is all in. Sprinkle some of that conventionally tribalist thinking on top of his conventionally collectivist mentality, and voilà, half-baked patently false claims are served up fresh: “In their [Jew’s] holy book, it says it’s okay to be pedophiles as long as it’s not another Jewish person,” Ye expounds. [FYI, that’s not true.]

The antidotes to collectivist ethics and formulaic cogitation are individualist ethics and reason. The former requires a deeper understanding of the moral exigencies for human life on Earth and the philosophic foundations upon which ethics rely. The latter requires a ruthless dedication to reality correspondence and solemn commitment to cognitive integrity. Both presuppose a personal acceptance of the responsibility to observe, evaluate, and judge for oneself. Together, they are the intellectual gold standard upon which America was founded. On the other hand, Ye’s advice to listeners is pure alchemy: “Forget the words ‘moral compass.’ Is it in the bible?” he asks. Leftists may be dichotomous thinking collectivists for whom intellectual analysis is limited to identifying where to place the bright line between in-group and out-group, but so are Ye and Fuentes. They do offer an alternative to leftism, but only in the most superficial sense. Immersed in clown world, they know only the fiat currency of philosophy: a collectivist coin with the ugly mug of Karl Marx staring up at them, and all they can think to do is flip.